Despite rain on the day before and the day after, coupled with severe weather warnings from the Met Office, we yet again managed to hold this major SECF competition in mainly sunny weather and no rain. The Gods must be looking on this event as a really worthwhile competition.

This competition started in 1993 and has been held every year since. The winners in the first year were Havering for both the singles and the doubles. After that early success, Havering appear to have disappeared completely. Does anyone known what happened to them? The competition has steadily grown over the years from about six or so clubs to the present entry of 22 teams from fifteen different clubs with seven of our clubs entering two teams. Each team has a base of four players but quite a number of clubs bring substitute players. With ten rounds of matches during the day, this provides opportunities for a minimum of eighty eight players to take part and with the substitutes that are normally used, we most probably top the 100 mark.

Comparing this event with all other croquet events in the UK calendar, I think we come out in the top spot for involving most players on one site for a day. Even AC Inter Counties only manages a maximum of 84 players at Southwick on any single day. From my knowledge of events abroad, we most probably hold the world record. Talking to one ‘worthy’ about what he enjoyed most on the GC Day, it was “you are likely to meet just about everybody involved with SECF croquet at this do and the croquet is very enjoyable as well”

In simple terms we run ten rounds of GC during the day, four rounds of doubles and six rounds of double banked singles. Its all handicap play. The scheduling is such players in teams without substitutes play one game on, then one game off. Naturally with ten rounds to complete we have to have quite tight time limits and games which are equal following the eight shots after time is called are treated as ties. The manager’s wife controls the start and stop of all games with her own sound generator (a fog horn) and is absolutely ruthless with the time keeping. Might sound a bit tough but all our teams have accepted it as the price we have to pay for packing so much into one day and teams are always ready for the next start, complete with the additional shots sorted out well in advance. I can’t remember an instance in recent years where we have fallen behind schedule.

Normally we find in this event that final results are often not settled until the last round, but this year in both doubles and singles, one team forged ahead right from the first round, managed to maintain their position and became clear winners. Reigate won the doubles with four wins from four games. Dulwich won the singles with ten wins from twelve games.

The lawns at Southwick were in superb condition, having been prepared for the
world GC championship, but we did have three cases of balls being stuck in hoops so probably some of the hoops had not been slacked off sufficiently. Unfortunately Southwick were unable to provide their usual repast at lunch time as all their catering volunteers were literally exhausted after the previous week’s efforts during the world championships but this was fully accepted by all with the promises of back to normal next year.

The full competition results are: 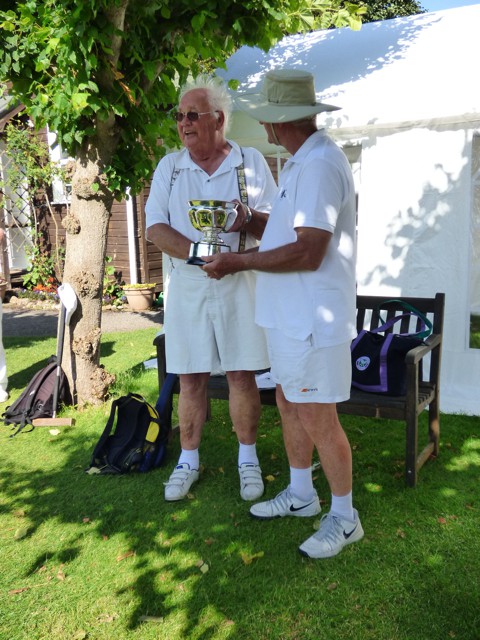 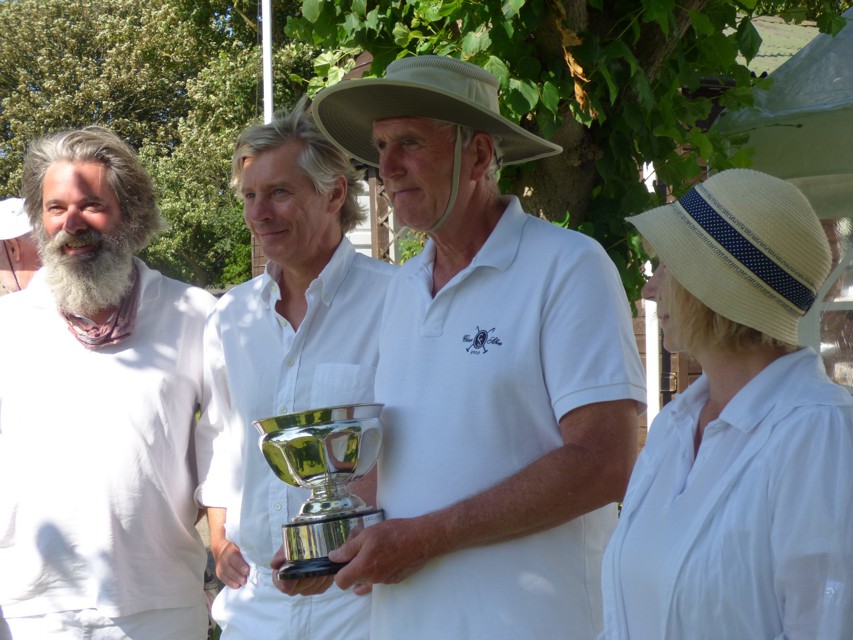 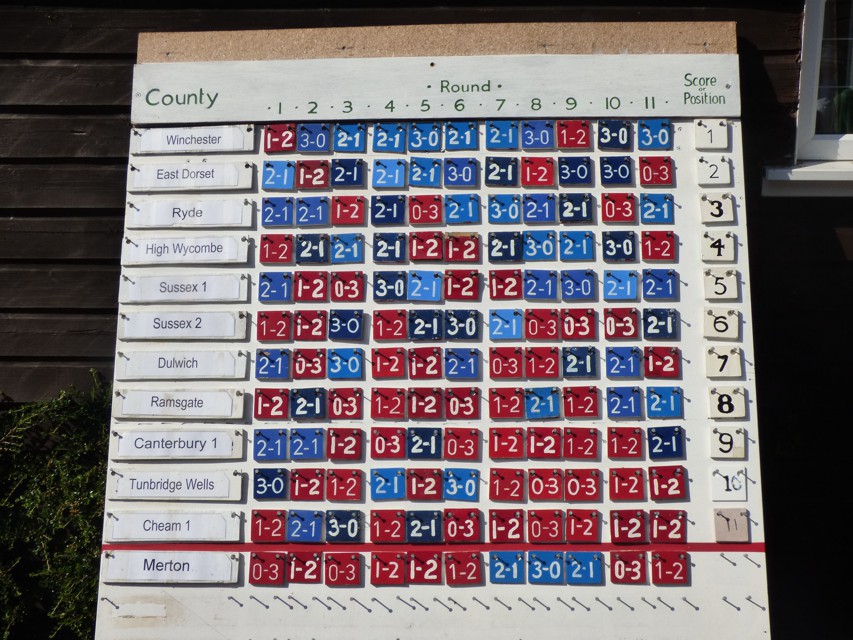 This was held over the weekend of 29/30 June at Southwick with the maximum entry of twelve teams. For the first time since the event started, we were able to operate our promotion/relegation system and welcomed Canterbury and Merton to the first Division at the expense of Rottingdean and West Worthing.

Yet again we were extremely lucky with the weather and Saturday tuned out to be the hottest day of the year with wall to wall sunshine on both days.

The format was a straight all play all giving us eleven rounds. However as we actually required twelve lawns for each round and only eleven were available at Southwick, all the missing games from each round were played in a preliminary round before the main competition started.

Although Winchester lost their first match, they followed this with seven straight wins and quickly established themselves as potential winners, but were closely pursued by East Dorset and Ryde. However, they managed to maintain their lead and finished clear winners with nine wins from eleven games whilst their nearest rivals each dropped a third game.

The lawn renovation work that Southwick have been doing in recent years is now started to show massive benefits on all lawns and dismissal to the outer reaches of lawns 10 and 11 is no longer a disadvantage.

The final results are as shown below:

Where matches and games were equal, position was decided by who beats who. 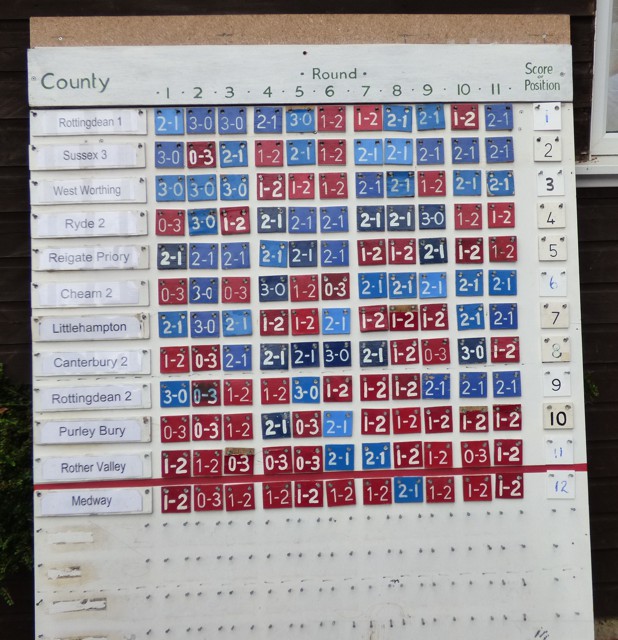 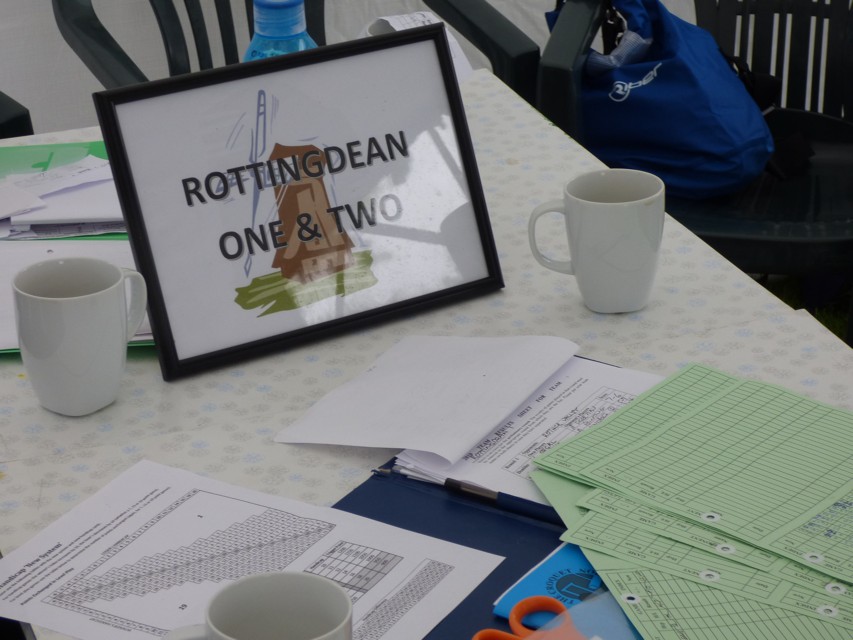 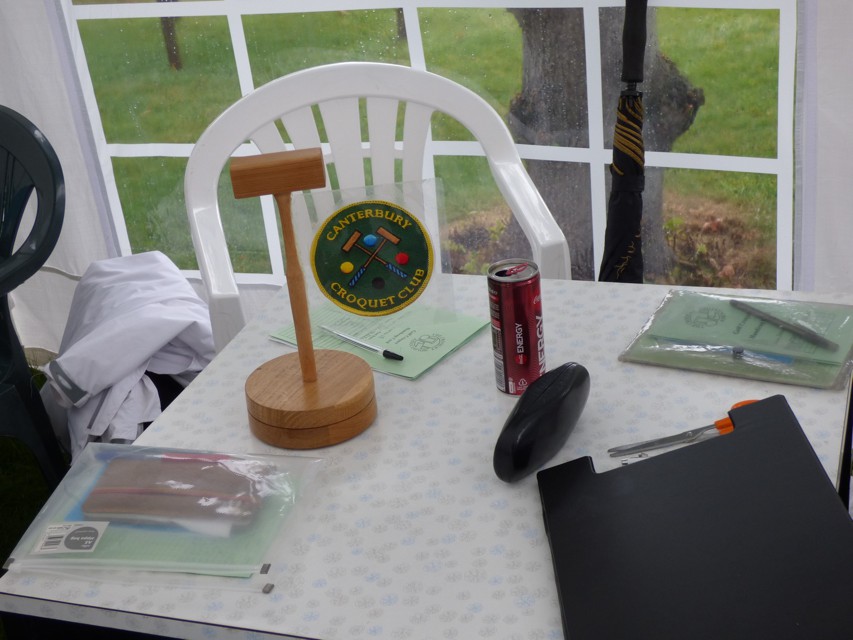 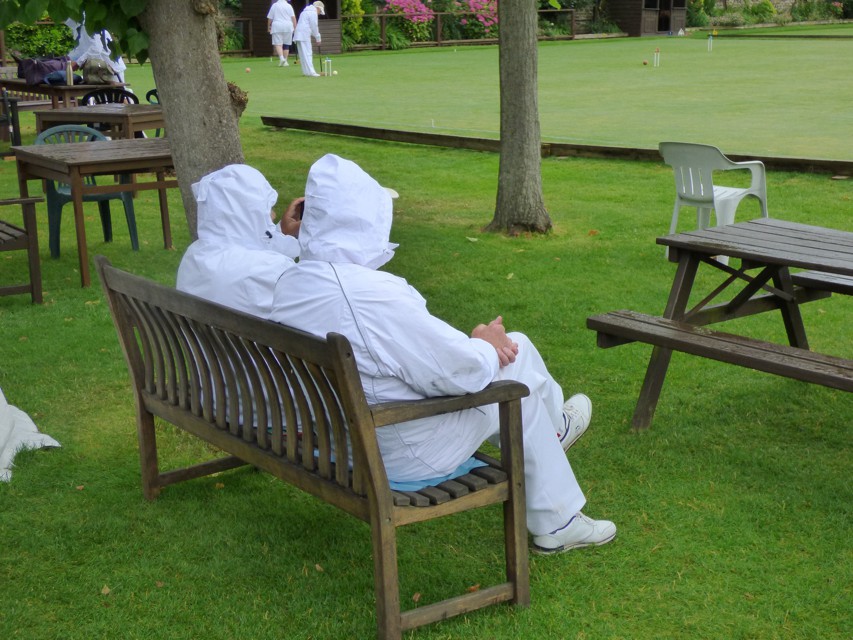 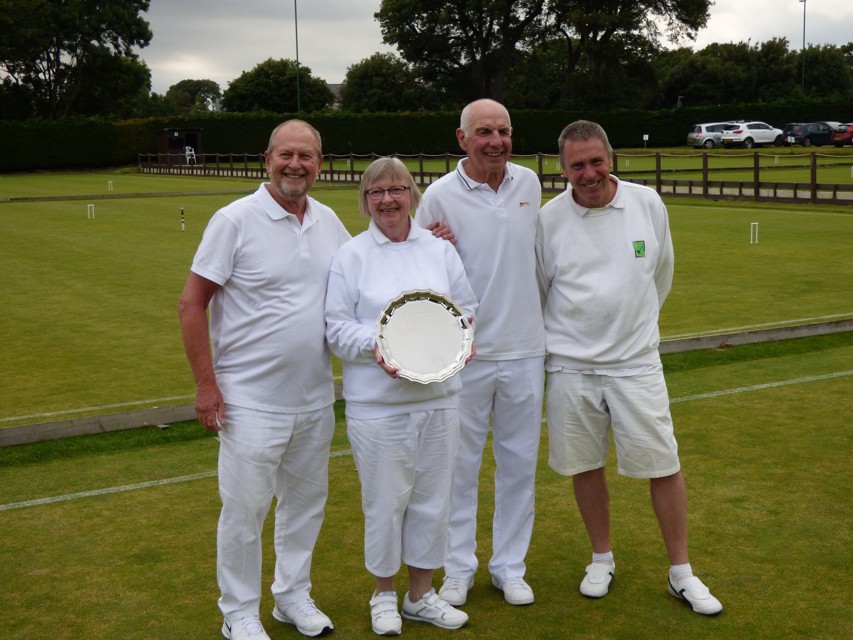 As Surbiton was not available this year, the two second divisions were combined into one event held at Southwick over the weekend of 6/7 July 2019. Because of the combination entries were at the maximum of twelve. Historically this gave a slightly tighter schedule than the second division normally meets but I am pleased to say no team wilted under the strain and all teams appeared happy with the arrangement.

The same format as division one was used giving us a total of twelve playing rounds with all players having a bye round at some point in the competition. Performances during the first day suggested that any one of five teams could be a possible winner and this situation continued right up to the final round.

Going into the final round we had four teams, Rottingdean 1, Sussex 3, Ryde 2 and Reigate, each with seven wins and it would have been quite possible for any one of these to win. Rottingdean 2 and Sussex 3 posted quite early 2-1 victories which gave them places one and two but we had to wait for the time limit to expire in the Reigate game before the lower places could be allocated. As the final table shows, the competition was quite well balanced but with Rottingdean showing a slight edge.

Although we had nice sunny weather on Saturday, Sunday started with a very light rain which brought out most of the waterproofs but not for very long.

It has become a practice in recent years for teams to establish an off lawn ‘base’ so that they can be easily found and team lists exchanged. The method of marking that base appears to be getting more and more elaborate as years go by as shown in two of our ‘pics’. 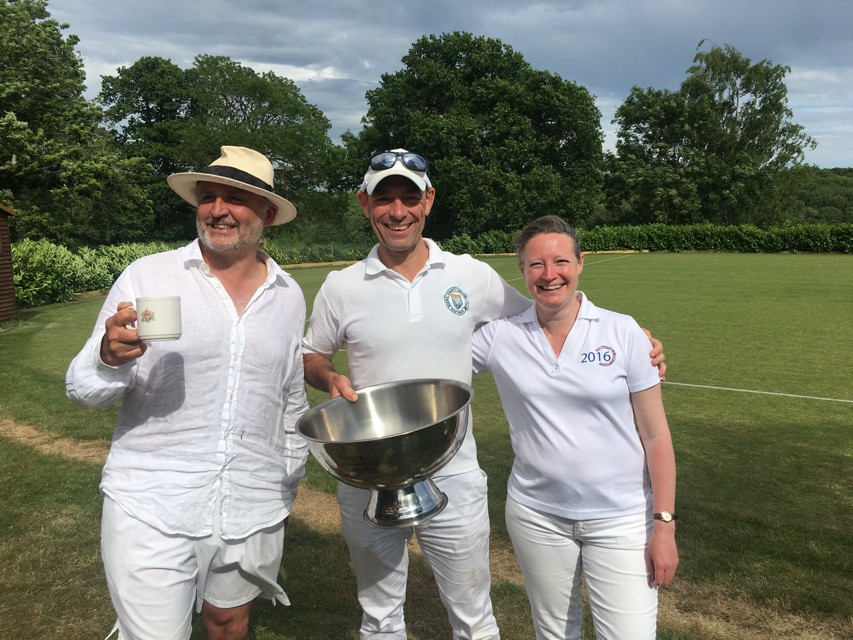 Sussex County win the One Ball 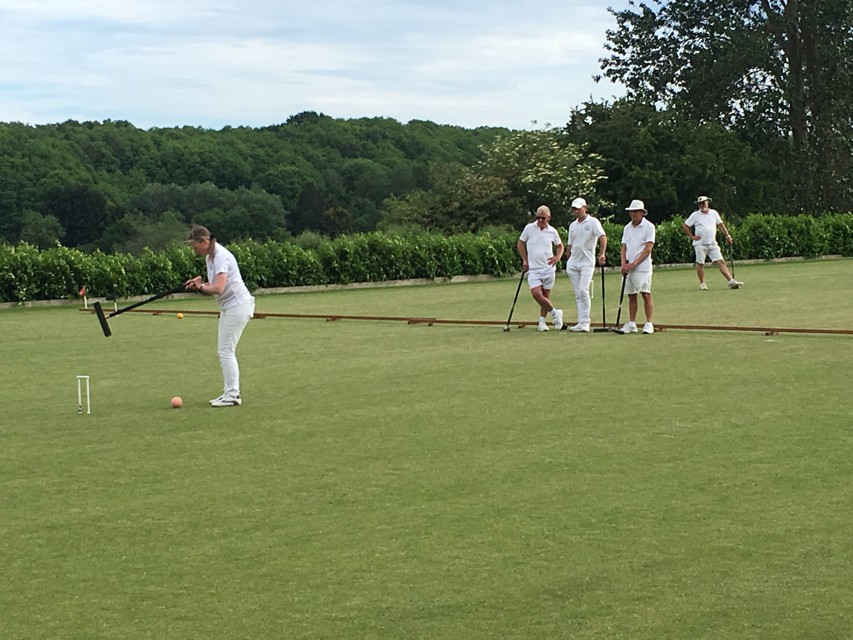 Sussex County swept the board at the second SECF Team Handicap One-Ball at Canterbury on Sunday 2 June.

Dropping only two games in their matches against Ramsgate, Tunbridge Wells, Canterbury A and Canterbury B, they took home not just the champagne bowl trophy but six Dartington crystal wine glasses for the longest break (8 hoops by Chris Coull) and a packet of Jammy Dodgers for the flukiest shot of the match. This was when Chris ran the wrong hoop, happened to hit his oppo on the far side, realised his mistake, rolled up to the right hoop and won the match.

The weather was as glorious as the food from Coral Barkley and her team of helpers, and a special mention goes to Ann Poole, Niel Morris and Lois Sales who turned out at short notice when holders Surbiton withdrew the day before the tournament. Ann even managed to win her game.

Frank Hughes took photos of the victorious Sussex team (Coull, Higgins and Jenkins) for the Kentish Gazette, with Jon Diamond taking the ones here. 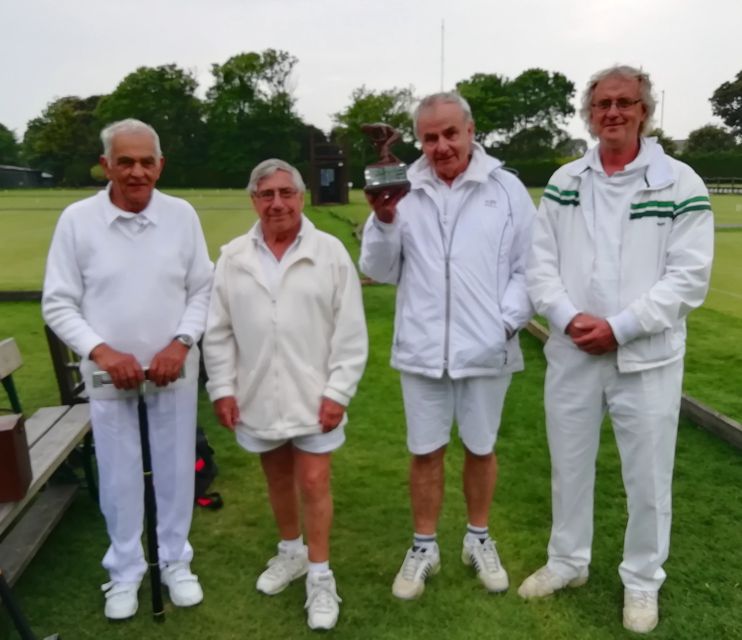 Yet again the difficulty of clubs finding sufficient players for AC events showed itself with Rother Valley having to withdraw at the very last moment.

However, we still had eight teams competing (same as last year) and it proved to be one of the tightest competitions we had seen for several years with five of the teams
finishing on six wins from ten games. Even the lowest three teams had four, three and three wins respectively.

As can be expected with such balanced teams, the final result was not seen until all games were completed with Medway eventually taking the title on best net points.

I think everybody would agree that we can now really appreciate the work that has gone into the Southwick lawn renovation, with the lawns playing very truly and quickly. Even the weather behaved itself quite well despite some rather alarming forecasts.

The full results are: