This took place in July/August 2019, with 80 competitors from 19 countries taking part. The clubs involved were the main host Sussex County together with Compton, Royal Tunbridge Wells and West Worthing.

A 24-player Qualifying Tournament in testing conditions took place at Guildford & Godalming with Simon Carter, Chris Roberts, Liz Farrow, Stephen Leonard, Helen Reeves and Richard Brooks (after a play-off) all qualifying and the final place won by David Wise in a play-off against Raouf Alim. Detailed results for this, as well as the Main Tournament are all on croquetscores.com.

Much planning and publicity took place locally, with banners and flags put up around these locations, in addition to Radio and TV interviews and (mostly local) press coverage.

The Opening Ceremony was performed by the Duke of Gloucester (shown here with the Presidents of the WCF and the CA) at Southwick. 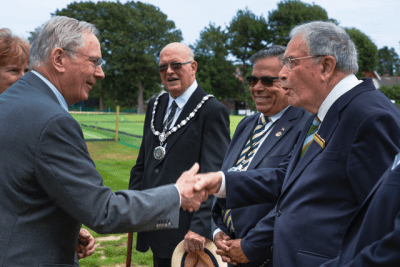 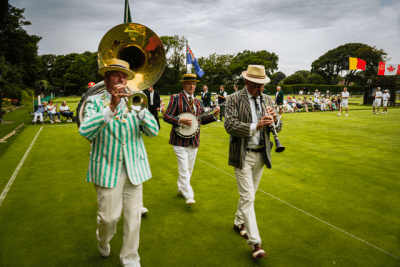 The first day (Saturday) started catastrophically for Tunbridge Wells, with 50mm of rain, so they were unable to host any play until after lunch and the planned opening by the Mayor (plus media?) had to be cancelled. Luckily this was the only major weather intervention throughout the event and things proceeded well to completion as scheduled.

Simon Carter as the main sponsor had a stonking result winning his block with an unbeaten record. Apart from this there were no major surprises in the Knock-Out qualifiers.

Simon’s comeback at hoop 12 to level the scores with a jump shot against Fathy Farouk in the decider with his starring hat:

However the first round of this knock-out was “carnage” with all four previous GC World Champions had been eliminated. First to go was Ahmed Nasr, losing 4-7, 5-7 to the solid Jonathan Powe. Next, it was reigning champion, Reg Bamford losing 4-7, 4-7 to Nick Archer. Third out was Mohamed Nasr losing 7-6 in the third against Josh Freeth, so less of an upset. Finally, 2015 champion Ahmed El Mahdi lost 6-7, 3-7 to Fathy Farouk. The final surprise first round result was the English Captain, J-P Moberly losing 7-6 in the third, having led 6-4 against Hamish McIntosh.

Crowds gradually built day by day, without any exceptional surprise results after this first round, until about 300 were around lawn 1 at Southwick watching the gripping Final between Ben Rothman from the USA and Mohamed Karem from Egypt, with more than 500 around the world watching the livestreaming.

In general both players were deadly at clearing balls from 13-20 yards, so use very different tactics to most players, and with very different styles in grips and mallets. Rothman uses a variation of the Solomon grip, with both hands hinged at the top of the mallet. Karem uses a variation of the Egyptian style, beginning by setting up the shot with hands at the top of the mallet which he moves down to the middle of the mallet on hard hitting shots to make the stroke (the top hand only grips the mallet between the thumb and first finger).

Mohamed got two games to one up (5-7, 7-2, 7-3) and was leading 6-3. Everyone was beginning to engrave his name on the trophy, but Ben fought back tremendously. Mohamed didn’t really have a chance to win at hoops 10, 11 and 12, but had an opportunity at hoop 13 to win by running it from the boundary (7 yards). Sadly for him it clanged against the wire; he then had another opportunity for a jump shot from the boundary, but missed, and Ben took his 6½ yarder shot to level the match.

In the end Ben’s nerves stood up to the tension better than Mohammed’s and he missed fewer hoop attempts, so ran out as the winner in the final 5th game 7-5 to become the first American World Champion after a gruelling match – starting at 11am and finishing up at 5:15pm 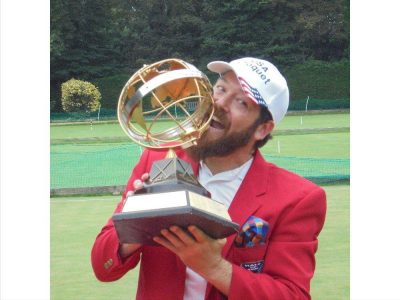 We had locally a great success with three sponsors contributing (AV Trinity, Wells Associates and Thompson, Snell, Passmore plus a grant from Royal Tunbridge Wells Together) and many spectators, in addition to some filming from Escape to the Perfect Town. The postings we made on this website can be accessed via this page.

There are a couple of photo albums that you can peruse and use as you wish in print or online: https://photos.app.goo.gl/cZKcCpP6dzH8RkbJ8 and https://link.shutterfly.com/9V4sxja2RY