In a thoroughly convincing performance over the weekend of 1-2 July The Ryde team of Roy Tillcock (Capt), Andrew Larpent, Stuart Peters, Pam Sim and Jonathan Smith won all four test matches against the other teams (from three clubs) that were competing.

The weather over the weekend was good and the Southwick lawns playing well, so it was really unfortunate that more clubs could not be persuaded to take part. As it was, the two days were a fairly relaxed affair with 10 rounds played over the weekend, with each test match consisting of two doubles and six single level play 13pt games.

The full test match results are:

Sussex B: beat East Dorset 6-2, Sussex A 5-3 and tied with Royal Tunbridge Wells

Royal Tunbridge Wells: tied with East Dorset, Sussex A and Sussex B

Thanks to John Low for managing the competition and to Fran Box, Rosemary Faulkner, Linda Gavigan and Chrissie Isaacs for the catering. 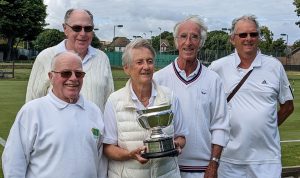 The winning team from Ryde