Five teams from Canterbury, Medway, Ramsgate, Surbiton and Tunbridge Wells gathered at 9.30am on Sunday 6th June under a beautiful clear blue sky to contest the one ball extravaganza at Canterbury CC.

Having consumed the muffins and coffee on offer, play started in earnest. At lunchtime after three rounds Canterbury, Medway and Surbiton were leading with two wins apiece and the stage was set for a competitive afternoon.

The food was very well received by all, the wine flowed and such was the convivial conversation that it was with great difficulty that we managed to persuade the contestants to resume play!

The fourth round resulted in Canterbury nosing ahead of the others, but it was still possible for Medway or Surbiton to taste victory after the fifth round.

In this last round Canterbury beat Medway to maintain an unbeaten record and receive the trophy with “bubbly” and generous applause.

The longest break prize was presented to Charlie Martin from Ramsgate.

On behalf of the contestants Trevor Longman from Ramsgate thanked Canterbury for their organisation of the tournament and remarked how much everybody had enjoyed the day. 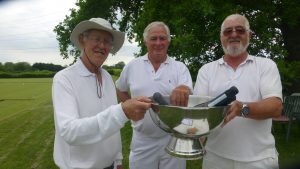 Canterbury – the 2021 SECF One Ball winners 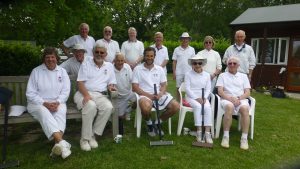