Eight clubs took part in this year’s SECF AC Teams Weekend at Sussex County on 8th/9th May, the first SECF competition since Covid-19 started. Normally this event has been run as a Swiss competition but this year, in order to provide a structure which would restrict unnecessary interaction between players, a pre-programmed order of play was developed in which over the two days each club would play all the other clubs.So it became more of a team event with the best final club score being the winner. Wins counted as one point with an additional point if both teams won in any round.

As it happened there was a very poor (and, as it turned out, somewhat inaccurate) weather forecast for the Saturday morning, and because of the very limited options for shelter it was decided on Friday afternoon to cancel the first game and postpone the start until lunchtime. Apologies to the two teams who did not get the message passed on to them. 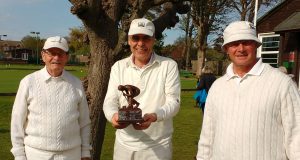